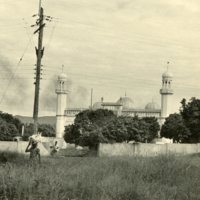 Located on Otieno Oyoo Street at Nyerere Road, Jamia Mosque was built in 1919. It features three silver domes and two minarets on its front corners. Jamia Mosque was the second mosque built in Kisumu and replaced the Railway Mosque, which was constructed in 1905 to serve the Muslims who had been among the Indian labourers who built the Uganda Railway to Kisumu (Port Florence).